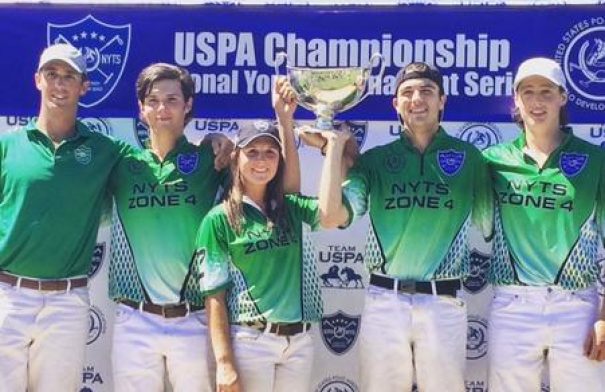 Maryland Polo Club was represented well in the 2015 National Youth Tournament Series (NYTS) as Zone 4 came out victorious in the Cecil Smith Cup on Sunday, Sept. 6 2015 at the Columbine Polo Club in Littleton, CO. Of the 4 players playing on the winning Zone 4 team, three are from Maryland Polo Club: Marissa Wells, Tommy Huber and George Hempt, demonstrating the strength of Maryland Polo’s youth program.

The USPA created a national tournament series in 2013 to provide more opportunities for youth players to compete outdoors with and against their peers at a local and national level. In an effort to grow and sustain the sport of polo in the United States, NYTS is a training module that prepares youth for formal outdoor tournament competition, challenges players to get to know their team, and identify their opponent’s strengths and weaknesses. Each of the four zones runs a series of qualifying tournaments in which they award All-Star status to players who have demonstrated outstanding horsemanship, sportsmanship, and the ability to navigate team dynamics all while playing at or above their current handicap level. In 2015, 321 players competed in 30 qualification tournaments that were held at member clubs across the country. A total of 135 players achieved NYTS All-Star status, and from that group, 16 individuals were invited by the selection committee to compete for their respective zone at the 2015 national championship.